On August 5, 2019, Tim and I set off on our first overnight canoe trip of the year. We wanted to do a two or three night trip, so we settled on the approximately 85km loop:

This particular route is suggested on the Provincial Parks’ Whiteshell backcountry map. Despite this, I couldn’t find many trip reports. The couple I found were from many years ago and mentioned wind was an issue.

On day 1 we put into Big Whiteshell at approximately 11am. The wind had already picked up a fair bit and by the time we arrived at the portage to Crowduck, Big Whiteshell was very agitated. Crowduck Lake is in an X shape, and the middle of the lake is always susceptible to big winds from all directions. The wind that day was from the NE and as we approached the crossing, we decided not to undertake it. We pulled into a nice island campsite near the crossing and checked our Garmin to see when the winds were going to die down. They weren’t, so we set up camp and had a lovely afternoon swimming, reading and enjoying the solitude and beauty of the area.

As usual, we were up before sunrise to get on the lake as early as possible before the winds picked up. If you check the backcountry map, there are no campsites for a long stretch between the Northeast end of Crowduck, until you get to Echo Lake – this is  accurate. There are lots of spots on Eaglenest to pull out of the water, but most of them have been turned into shorelunch places for the fishing lodge that’s on Eaglenest. Once you enter the channel to Little Echo Lake, there are almost no spots to get off the water. There is marshy tall grass on both sides and most of the shoreline is rocky cliffs. It’s important for you to know that there are very few places to get off the water here until you reach the portage to get into Echo Lake. The situation for us was further complicated by what appeared to be a potential flash thunderstorm developing above. Thankfully, it passed, but we were worried for a few minutes.

As the afternoon went on, the winds picked up and changed direction so that we encountered strong WSW winds in the channel that includes Little Echo Lake & Parks Lake between Eaglenest and Echo Lake. It’s only a few kilometers but it took us a very long time to cross due to the winds. The rock cliffs seemed to funnel the wind and created some very agitated water. When we reached the final stretch of Parks Lake and could see the portage to Echo, we actually had to pull off on a couple of rocks, not able to complete the crossing at that time. Here, we waited about 90-120 minutes for the wind to die down, unsure we had the energy to attempt the short crossing if it didn’t. It wasn’t a suitable camping spot (a few rocks and very dense bush.) Thankfully, the wind died down and we were able to portage into Echo Lake. On Echo, the wind stopped almost completely and we had a peaceful paddle to the second mainland campsite, pulling in just as daylight disappeared, around 9:30pm. This was an extremely long day on the water. I didn’t even take any pictures throughout since the greater part of the day was spent paddling into the wind and there wasn’t a minute to spare to snap pics. It was so late when we set up camp that all we did was eat a bit of food and went to sleep.

On Day 3 we were paddling by 6:30am. The channel at the South end of Echo Lake was completely overgrown by marsh grasses. We paddled about 2 kms through this: 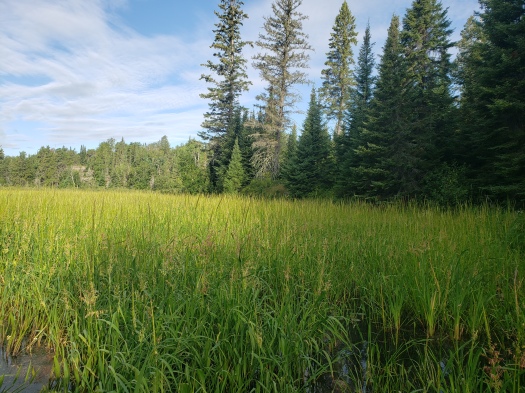 At times we came across a bit of the remnants of what may have been a clear channel to paddle through, but for the most part it was paddling through tall grass hoping we didn’t get stuck.

Finally we reached the portage to get onto Saddle Lake. On the Saddle Lake side of the portage there is a small shelter full of discarded garbage, empty booze bottles and other garbage. 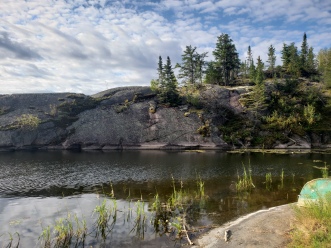 We quickly paddled through Saddle Lake and portaged back onto Crowduck Lake. The winds were strong but thankfully mostly at our backs, so we made good time in the first arm of Crowduck. Unfortunately once we reached Big Whiteshell, the wind was no longer at our backs. We waited here for about 2 hours, trying to decide if we had the energy to cross or whether to call it a day and set up camp at the nearby Hemenway Lake campsite, part of the Mantario Trail. We were hoping the wind would die down, but our Garmin weather report indicated the wind wouldn’t slow down until 9 or 10pm, too late to paddle. Ultimately, we wanted a beer and burgers! So we decided to attempt to cross, much to the dismay of the boaters on the lake, each of which we encountered advised us against going further. One even offered us a tow. We broke it down into several legs, stopping on almost every island along the way to reassess and rest. What can be done in 60-90 minutes on a good day took us 3+ hours to complete this time and we finally reached the boat launch at about 7:30pm.

I unfortunately don’t have a lot of pictures since it was a very challenging paddle and there was very little time to relax other than during our first afternoon on Crowduck Lake.

As with all the other trip reports I read on the area, I would like to caution others considering this loop that you may be at the mercy of the wind. We had allowed for an extra day and we also had our Garmin Inreach to communicate with family should we have needed more time. I would not recommend this trip if you’re unable to allow for extra time or don’t have a device to communicate unexpected delays with your friends and family. I also really appreciated the Garmin to check the weather. I felt it gave us a bit more knowledge on how and when to best tackle the wind. You need strong paddling skills to manage the windy conditions that may be encountered. I would not recommend this loop for beginners since there are many potential challenges that could cause a beginner’s trip to go sideways. If you like a potentially challenging route and the possibility of paddling on windy lakes, this may be a route to consider. Send me a message if you’re considering this route, I’d love to tell you more about it!